Skip logic is a feature within Interviewer that allows you to conditionally skip or show stages within the interview, based on the current information in the interview network. By skipping or showing certain stages, you are able to direct the path a participant takes through your protocol.

For example, if a participant indicates on an ego form stage that they have never used drugs, you may configure your protocol using skip logic to not show them subsequent name interpreter stages that ask about drug use with alters.

The following is a high level overview of the way that this feature works:

Adding Skip Logic to a Stage

To add skip logic to a stage, open it from the timeline view, and click “Use skip logic” to expand the section. 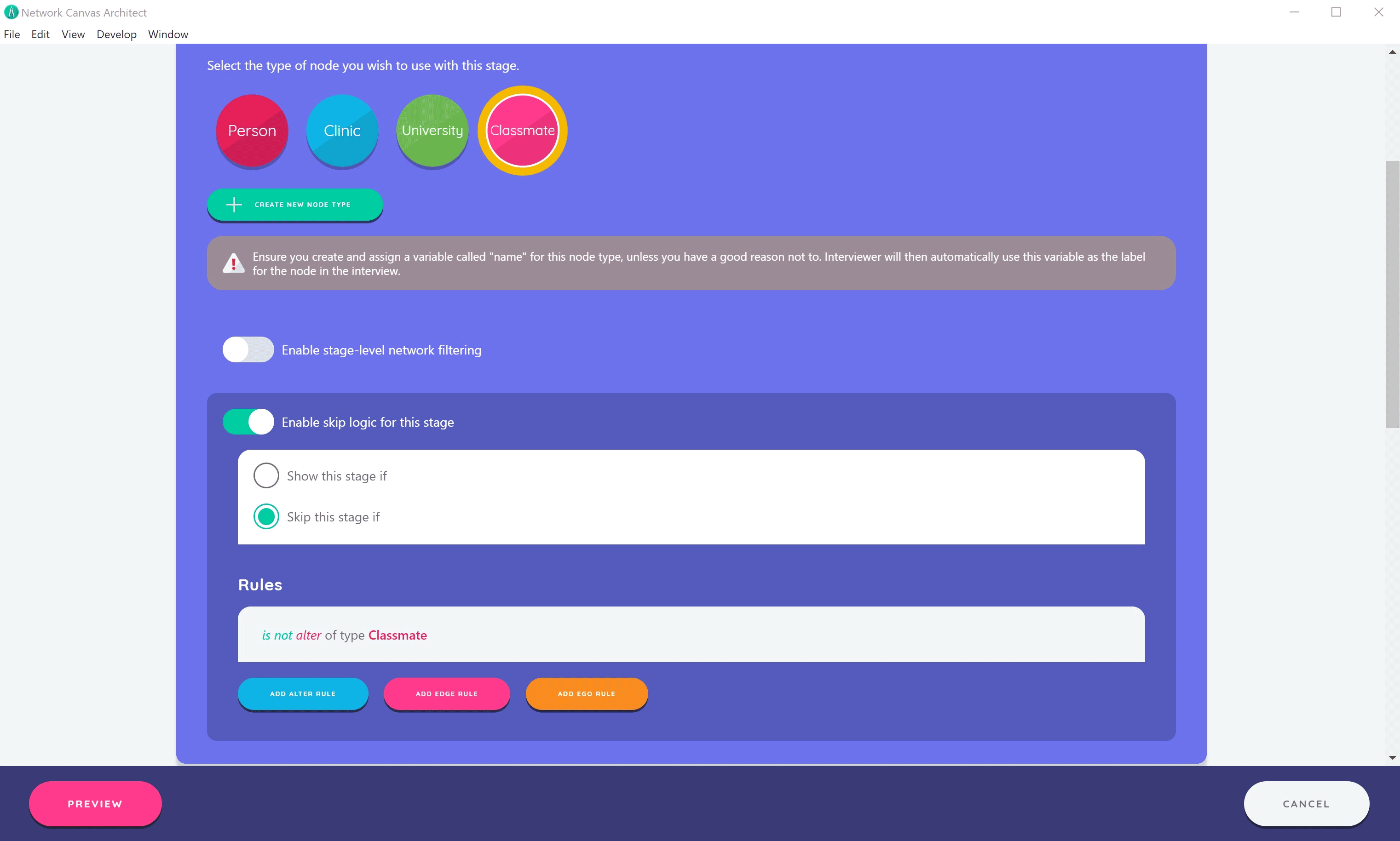 To disable skip logic for a stage, click the toggle at the top of this section.

You can see which stages have skip logic enabled by looking for the skip logic icon next to the stage on the timeline.

Constructing rules is the most fundamental part of creating skip logic. There are various types of rules, depending on the network entity that is being targeted:

Rules are chained together (or ‘joined’) using either AND or OR logic, which is set in the skip logic configuration section using the “Must match” options “all rules” and “any rules” respectively. The joining operators govern how multiple rules are evaluated together to determine the overall boolean value that the query returns.

This means that the choice of join operator can have an extremely significant impact on the way that your rules are collectively evaluated. One way of thinking about the difference is that you should use the “all rules” option in situations where there is only one scenario where a stage should be shown. You can then add as many rules as you need to ensure that this scenario is as specific as possible.

Alternatively, use the “any rules” option for situations where there are many reasons a stage should be shown. For example you may show an information screen with an embedded intervention video if a participant has demonstrated any one of a number of risk behaviors.

Before we know the final outcome of the skip logic rule, we have to consider one last configurable property: the “show this stage if” or “skip this stage if” selector. This option simply allows you to decide if a ‘true’ outcome from evaluating your rules should cause the stage to be skipped or to be shown. This effectively allows you to write rules in terms of negatives - that is, to instead write rules that define when a stage should be shown rather than when it should be skipped. This can be more useful if you have a lot of values to include or exclude.

For example, if you wished to skip a stage based on if a categorical variable with many options is set to all but one possible value, you would typically have to write a rule for each value, and use the OR operator. However, if you were to set the skip logic to “show this stage if”, you would only need to define a single rule, that included the value that is specifically permissible.

Take extra care to think through the logical repercussions of your join operator when changing this property, as it can be somewhat counter-intuitive. It is very easy to make your rule too specific using the AND operator!

Since skip logic can be confusing to new users, we have provided an extended example below.

Consider an interview where you are using a Categorical Bin Interface to classify the participant’s relationship with alters. You define options including ‘friend’, ‘spouse/partner’, ‘coworker’, ‘parent’, ‘sibling’, ‘child’, ‘uncle/aunt’, or ‘grandparent’ with corresponding values of 1, 2, 3, 4, 5, 6, 7, and 8. 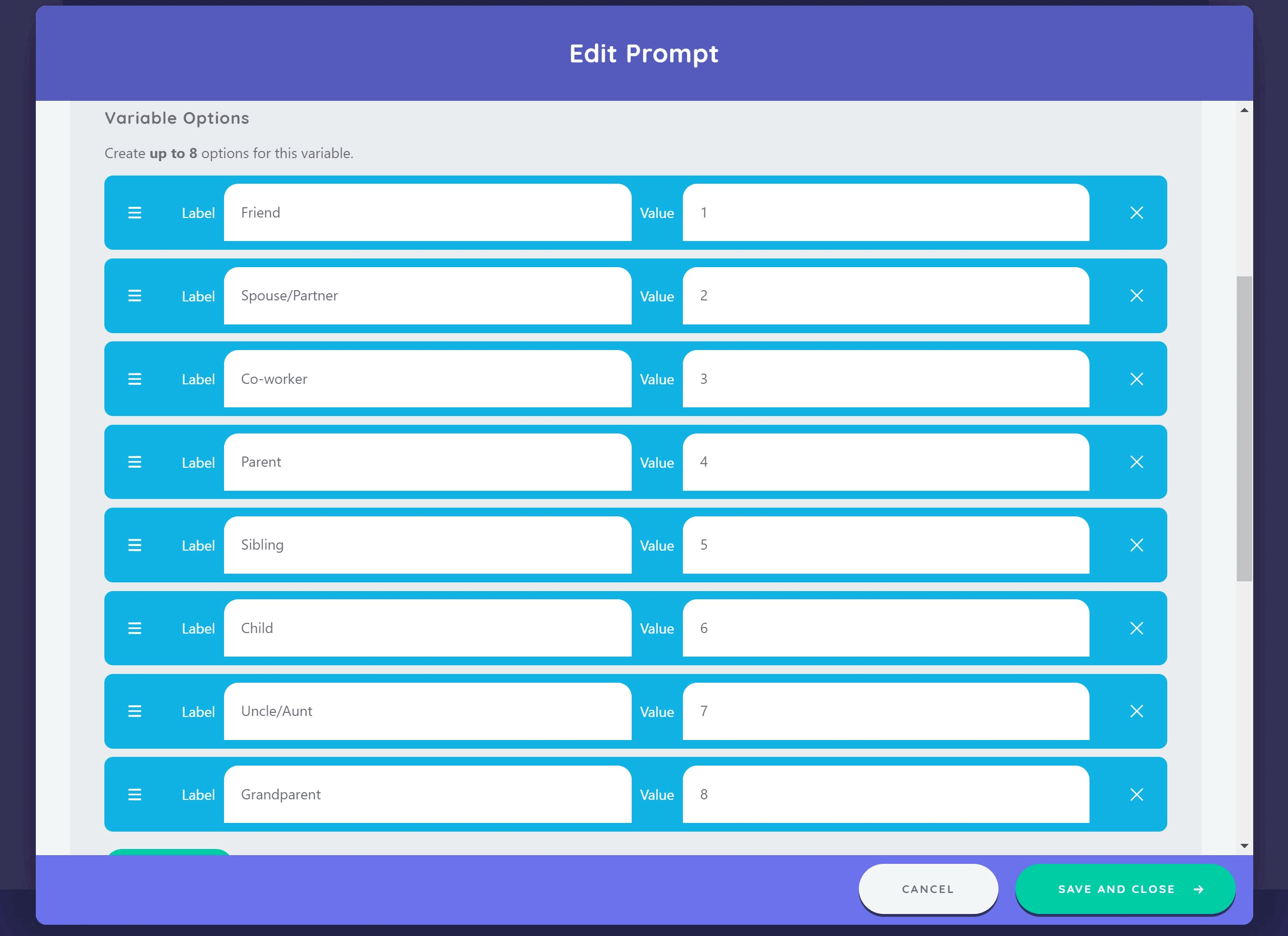 In the following stage you want to use another Categorical Bin, but this time to capture type of relatedness of alters to ego (e.g. ‘biological’, ‘step’, ‘adoptive’, ‘through marriage’, etc.). Now let us imagine that a participant did not nominate any alters to whom they are related (i.e. they have only nominated friends, spouse/partners, and/or coworkers). In such an instance, the type of relatedness stage would be irrelevant and, therefore, implementing skip logic to skip this stage entirely for such a participant would both increase efficiency and minimize respondent burden.

We implemented a simple skip logic rule to address this, as follows: 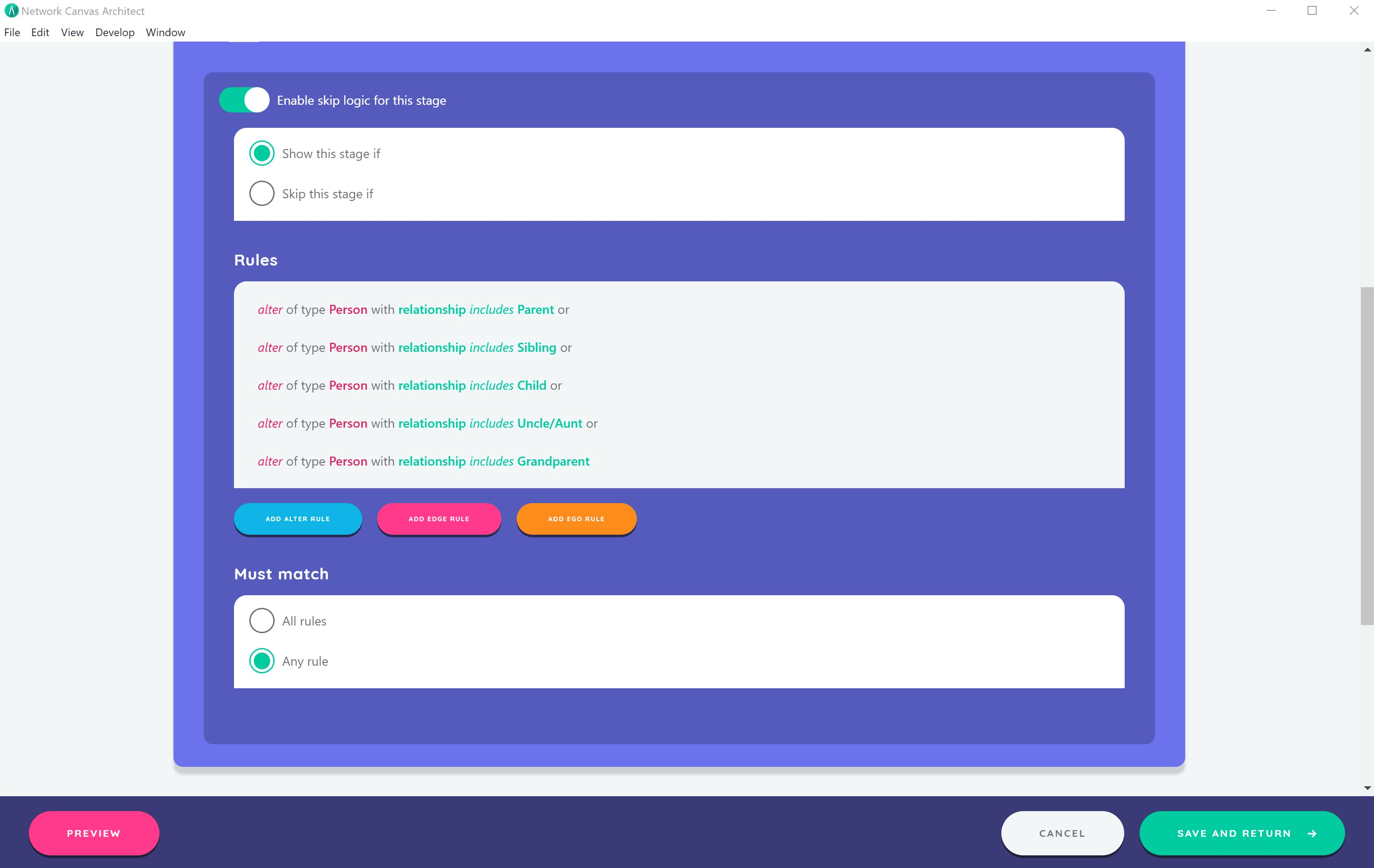 In the above example, you could also configure your skip logic to achieve the same outcome by implementing the inverse rule (i.e. skip screen if alter of a type Person with Relationship excludes 4, 5, 6, 7, or 8).

In either case, once you create more than one rule in your skip logic for a given stage, you need to determine whether you want all the rules matched or just any of the rules matched. In keeping with the examples above, let’s imagine that you want to create a subsequent screen to capture data about a participant’s biological nuclear family. You want this screen to be shown if a participant previously nominated alters with Relationship type ‘parent’, ‘sibling’ or ‘child’ and where these alters include type Relatedness of ‘biological’. Here you would use the ALL operator since you would not want the stage to be shown if the participant has alters in their network of Relationship type ‘parent’, ‘sibling’ or ‘child’ but none of them include type Relatedness ‘biological’.